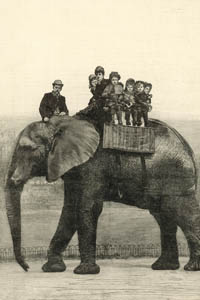 In honour of the recent documentary entitled Attenborough and the Giant Elephant, we’ve delved into the archive to share these lesser seen Jumbo gems.

Captured as a calf in the Sudan, Jumbo toured with Menagerie Kreutzberg in Germany and was exhibited at Jardin des Plantes in Paris before arriving at Regent’s Park Zoological Gardens in 1865(he was traded for a rhino, fulfilling London Zoo’s desire to have both an African and an Indian elephant in their collection). He became a great favourite with visitors, giving rides to children on his back. Amongst the treasures in the archive is an original handwritten letter from Jumbo’s keeper Matthew Scott, accompanied by a photograph, replying to a fan enquiring as to circumference of the elephant’s feet.

When P.T Barnum, the American showman and businessman, purchased Jumbo some seventeen years later in 1882 for £2,000, there was widespread public outcry in England, summarised in this cartoon by Alfred Bryan, published in March of that year, with the caption “If you take Jumbo, Mr Barnum, and he should revenge himself, don’t expect any sympathy from the English people.” Punch magazine cheerfully published a cartoon suggesting Barnum take an altogether different beast, the MP and atheist Charles Bradlaugh(caricatured as an incalcitrant wild boar), instead of the much loved Jumbo.

Jumbo’s departure from England was covered in great detail in the press; the logistics of transporting such a large cargo even to the docks, let alone across the Atlantic, aroused great interest. Pleasingly for the English, Jumbo showed great patriotism in his reluctance to leave the country, with much cajoling required.

On Jumbo’s departure from Millwall docks, Mr. A.B Bartlett the superintendent of the Zoological Gardens gave a speech, quoted at the time in The Illustrated London News, which interestingly alluded to Jumbo’s occasional violent outbursts.  “He was an extraordinarily good-tempered beast…at the same time he was subject to periodical outbreaks, which from his immense strength made him, although the most amicable, the most dangerous animal Mr Bartlett had ever known.”

Barnum reportedly recouped the money from the purchase within just three weeks with the takings from exhibiting Jumbo in America. Jumbo became a star attraction, and on 30th May 1884 took part in a publicity stunt by Barnum, where 21 of his elephants marched across the newly built Brooklyn Bridge, to assure members of the public that the bridge was safe following a stampede just six days after the bridge was opened, in which 12 people were crushed and killed during a panic.

Jumbo died in tragic circumstances when hit by a train at a marshalling yard in Ontario, Canada in 1885. Barnum encouraged a story that suggested Jumbo has died trying to protect a junior elephant, Tom Thumb, from an oncoming train, but examination of Jumbo’s bones in Attenborough’s documentary suggest a less altruistic version of events, where Jumbo may have died simply whilst trying to escape from the train himself.

Even in death, Jumbo was a source of fascination and revenue; The Graphic depicted the plans to have Jumbo’s hide stuffed and displayed, with his skin reportedly being stretched to enhance his stature even more. The Graphic reported that the day after Jumbo died, “Mr Ward of Rochester, New York State, aided by half a dozen butchers, skinned the monster in three pieces, which were placed in a warm bath of salt and alum, and together with the bones, sent off to Rochester, where a special house was constructed in which to mount the skin and skeleton.”

His skeleton was sold separately and also exhibited, with his heart being sold to Cornell University. Poor stuffed Jumbo continued to tour as a stuffed exhibit for two years, when he ended up on display at P.T. Barnum Hall at Tufts University, Massachusetts. In 1975 much of stuffed Jumbo was destroyed by fire, but his bones, stored separately in the American Museum of Natural History in New York City, escaped destruction and proved a valuable asset in Attenborough’s research for his documentary.

The diverse material in the archive here at Mary Evans offers a fascinating on-the-spot look at how Jumbo was portrayed in the British press at the time, and is a compelling evocation of the great public interest that was taken in Jumbo.