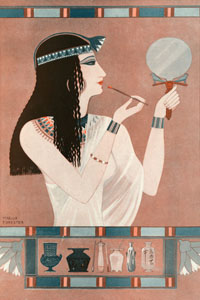 This weekend, the Saatchi Gallery opened its long-awaited exhibition, “Tutankhamun – Treasures of the Golden Pharoah”. As blockbuster exhibitions go, it’s up there with the best of them. Having recently closed in Paris, the exhibition became France’s most visited of all time with attendance of over 1.4 million and is the last opportunity to see 150 objects from the boy-king’s tomb before they become a permanent exhibition at the Grand Egyptian Museum, which is currently under construction. We haven’t been yet but it’s certainly tempting, despite the eye-watering admission price.

When Howard Carter, sponsored by Lord Carnarvon, finally discovered Tutankhamun’s tomb in November 1922, it was one of the biggest news stories of the century. Even though it would be many more months before it was considered safe enough to begin to remove objects from the burial chamber, nevertheless, the discovery precipitated a global craze for Egyptian style.

Napoleon’s Egyptian Campaign of 1798-1801 and the discovery and deciphering of the Rosetta Stone in 1799 was the catalyst for the first wave of Egyptomania in the early nineteenth century. Aristocrats commissioned their homes to be decorated in an Egyptian style and even whole buildings referenced its art and statuary. Examples include the Egyptian Hall in London (built in 1812, demolished in 1905), and the curious Egyptian House in Penzance, dating from the early 19th century. The opening of the Suez Canal in 1869, and the British occupation of Egypt from 1882 only served to increase interest. And when Thomas Cook began to offer Egyptian holidays and Nile cruises in the later 19th century, the exotic sights and cultural heritage of Egypt became a familiar style touchstone to a wider society.

Carter’s landmark discovery in 1922 led to a renewed and unprecedented Egyptomania boom.  Egyptian motifs and hieroglyphics were an ancient echo of more modern 1920s designs, and Tut-mania’s influence extended to music, fashion and much more. Here are a just a few examples from our collection, reflecting how when the world went Egypt-mad in the 1920s.

Fashion – A subtle take on Egyptian style by London couturier, Isobel from 1923; a dress, (according to The Tatler magazine’s description) “in Egyptian colours” that includes Egyptian embroidery at the waist, as does the more modest dress with the white collar. The page from The Sketch, July 1923 reports on a variety of outfits displaying the “Tutankhamun Touch”, while the colourful pattern is a fabric design from the 1920s, clearly incorporating Egyptian motifs.

Fancy Dress – Ancient Egypt certainly opened up some glamorous possibilities for fancy dress (debutante Mary Henniker-Heaton won a prize in Monte Carlo for her costume), but the photograph of a mother, father and daughter all getting into the homespun Tutankhamun spirit is particularly charming.

Music – Popular music composers were often the first to absorb current events and topical skits into new tunes. In the Days of Tut-ankh-amen was written and composed by Reg Low and J. P. Long, and sung by musical comedy duo, Norah Blaney and Gwen Farrar in the Andre Charlot revue, ‘Rats!’ at the Vaudeville Theatre in 1923.

(read about Gwen and Norah in a new biography by Alison Child here – https://www.behindthelines.info/tell-me-i-m-forgiven-gwen-farrar-norah-blaney/

Jewellery – Even Cartier brought out new designs of jewellery inspired by pieces of Ancient Egypt. The Illustrated London News featured examples of the “Tutankhamun Influence” while Gazette de Bon Ton featured an illustration of a brooch and drop earrings in 1924.

Architecture – Cinema and theatre was one area where architects could let their imaginations run wild. A number of picture houses built during the inter-war years were an Egyptian riff on the art deco or ‘moderne’ style. The interior of the Egyptian Theater at Bala-Cynwyd, Pennsylvania is an exquisite example, while in London, the former Carlton Cinema on Essex Road in Islington (now a Mecca bingo hall) is pure and unapologetic Egyptian fantasy. The entrance to the Straussenhaus, Berlin Zoo, which is designed in the style of an Egyptian temple is Egyptian style at its most flamboyant and the fact that it was built in 1912, demonstrates that Tutankhamun simply fanned the flames of a craze that had never really gone away.  Of course, if you wanted a touch of Egyptian style in your own home, then you could always embroider some designs courtesy of Weldon’s Beautiful Needlework magazine.

Graphic Design – This cover of The Graphic’s Egypt Number as well as the rather nice illustration by an Egyptian woman applying make-up by Marius Forestier in The Sketch, 1924, are just two examples of how magazine illustrators enjoyed playing around with Egyptian themes. The chic little trade card for an Egypt hotel, and perfume advertisement meld art deco with Egyptian style while the Houdini poster and ‘fortune book’ drew on the perceptions of Egypt as a place of mystery and spiritualism.