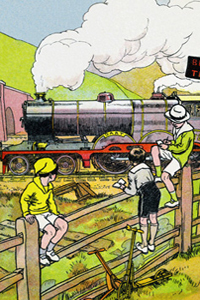 A devout railway enthusiast at heart, I regularly enjoy any images here in the archive that celebrate the railways throughout history.  The library’s railway holdings span an eclectic array of subjects and media; from striking 1920s Art Deco travel and advertising posters, through to detailed technical drawings of early locomotives from the archive of the Institute of Mechanical Engineers.   The railway-themed content available at Mary Evans is wholly unique and ideal for publishing projects,  greetings cards and merchandise with that railway enthusiast in mind – a selection of my favorites you will find here.

Whilst locomotives have been marveled since the birth of the railways, the more formal hobby of ‘trainspotting’ began in the early 1940s when Ian Allan, (of Ian Allan Publishing), worked in the PR department of the Southern Railway at Waterloo Station.  The department was regularly inundated with requests from ‘railfans’ for numeric information on locomotives.  As a solution to the requests and their increasing demand on time, Allan sought to compile a book of locomotive numbers as a handy resource for the enthusiasts and thus, the ‘ABC of Southern Locomotives’ was published.

The popularity of the ‘ABC of Southern Locomotives’ acted as a spring-board for many more titles relating to different locomotives and other railway companies and resulted in the creation of Ian Allan Publishing.  By the mid-1940s, trainspotting had become a national pastime and a particularly charming and nostalgic set of images are the illustrations and photographs in the archive relating to the enthusiasts themselves – evocative of the thrill and excitement of seeing a majestic locomotive roll-by.

As well as out on the platform or by the track, railway enthusiasm is equally as popular in the home and was first introduced to households during the first half of the 1800s, in the form of model railways.

The ‘Birmingham Dribbler’ was the first relevant and popular model locomotive which would simply run over a carpet or surface rather than a track.  As enthusiasm for the railways grew, so did the demand for quality and realistic models, not only for locomotives, but also for intricate landscapes and environments to create scaled versions of ‘real-world’ railways. “The first mass market railway sets where made by Marklin in Germany in 1891 but it was a group of English hobbyists who in 1904 began model building” Gerald, BBC A History of the World 2010.

In the UK, Hornby Railways (founded in 1901, Liverpool) carved its way as industry leader for railway modelling throughout the 20th century and to the present day continues to be a well-known household name.  The growing popularity of model railways spanned all age groups and classes and they were even enjoyed by aristocracy, which included the 9th Earl of Lanesborough, who was photographed with his train set for The Tatler, 26th March 1958 issue.

Denis Anthony Brian Butler, 9th Earl of Lanesborough (28 October 1918 – 27 December 1998), Irish aristocrat pictured with the large model-railway he had set up in his home, Swithland Hall. A railway enthusiast, he applied to British Rail to be a train driver but was unsuccessful!

With the development, modernisation and upgrading of the railways, discarded and outdated railway artifacts, objects and printed material, collectively ‘railwayana’ started to become highly popular among collectors and hobbyists.  This continues to be the case with vintage British Railways travel posters, for example, regularly selling for thousands of pounds at auction.

Dr. David Lewis Hodgson, whose archive we represent here at Mary Evans, created a number of photo essays during the 1960s which often focused on unusual events, experiments and people.  A couple of excellent examples relating to railway enthusiasm include a series of photographs covering a British Railways memorabilia, or ‘railwayana’ sale, and an enthusiast couple who operated a model railway from their home complete with uniforms, a workshop and  a Station Master’s office! More images relating to railway enthusiasm can be found here.