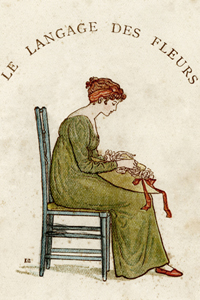 The concept of flower symbolism goes back many centuries, and examples of it can be found in many countries. One theory for its origin is that in some countries where women were not taught to write they used flowers instead to convey their messages.

A famous example from English literature is the madness and death of Ophelia in Shakespeare’s Hamlet. Having handed out some meaningful herbs and flowers to various characters during her mad scene (rosemary, pansy, fennel, columbine, rue, daisy, violet), she drowns in a stream with weeds and flowers in her hands (crow flowers, nettles, daisies, long purples). In his painting Ophelia (1852), the Pre-Raphaelite artist John Everett Millais combines flowers from both scenes, and adds a few more of his own (roses, forget-me-nots and poppies).

In the 19th century there was a huge surge of interest in the language of flowers or ‘floriography’. By the end of the century many ‘floral dictionaries’ had emerged, both in the UK and in America, some including poetry and illustrations. A book entitled Flower Lore: The Teachings of Flowers, Historical, Legendary, Poetical and Symbolic (1879) by a Miss Carruthers of Inverness became a standard source, and one of the best known examples, thanks to its illustrations, is Kate Greenaway’s The Language of Flowers (1884), still in print today.

All of this came at a time when flowers were part of a coded language of courtship—a man giving a woman snowdrops, for example, could be an expression of hope, while violets would signify faithfulness. The nosegay (a small bouquet) was very popular with the Victorians, either as a gift or as a wedding bouquet. Flower symbolism also appeared on greetings cards (especially Valentine’s cards), postcards, in embroidered form, as well as in accessories such as fans and ephemera such as soap wrappers.

Roses to most people’s minds signify love, but the different colours, and whether in bud or full flower, have different shades of meaning: single rose (simplicity), deep red (bashful shame), damask (brilliant complexion admired), cabbage (ambassador of love), white (I am worthy of you), white and red together (unity), white bud (girlhood), red bud (pure and lovely).

With all this floral activity going on there was bound to be a cynical backlash sooner or later. The scientist and novelist H.G. Wells wrote a humorous essay (circa 1897) ridiculing romantic flower symbolism: ‘There was no downright “No!” in the language of flowers, nothing equivalent to “Go away, please,” no flower for “Idiot!” The only possible defence was something in this way: “Your cruelty causes me sorrow,” “Your absence is a pleasure.” For this … you would have to get a sweet-pea blossom for Pleasure, wormwood for Absence, and indicate Sorrow by the yew, and Cruelty by the stinging-nettle. There is always a little risk of mixing your predicates in this kind of communication, and he might, for instance, read that his Absence caused you Sorrow, but he could scarcely miss the point of the stinging-nettle.’

Whether we agree or not with H.G., the flower industry seems to be still flourishing nicely!