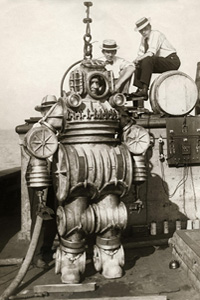 Serious exploration of the underwater world began in the early 17th century, when the first submarine was invented by Dutch physician Cornelis Drebbel.  Then, the environment beneath the sea was considered the most dangerous and mysterious on earth – long before the prospect of exploring environments, such as outer space, was even feasible.

The invention of individual diving suits in the early 18th century allowed a more refined exploration of the ocean depths.  The initial drive for the creation of diving suits was to aid salvage missions, at a time when many ships (carrying many treasures) were lost to the ocean on perilous journeys.  The first diving suits were designed in 1710s and in 1715, English inventor John Lethbridge created the first fully-enclosed suit, consisting of watertight sleeves, a pressurised air filled barrel and a viewing hole.

These basic elements formed the foundation for the design of future diving apparatus, the technological advances of which were covered regularly in illustrated scientific periodicals of the 18th, 19th and 20th centuries.  Expeditions to ships sunken in WWI and WWII, fueled by public intrigue and fascination, were often dramatically illustrated in the likes of newspapers such as the Italian Sunday supplement; “La Domenica Del Corriere” and the French illustrated supplement “Le Petit Parisien”, with bold and vivid interpretations of almost robotic-like diving suits placed in otherworldly environments.

Early diving suits, far away from today’s equivalent, continue to be well-received in popular culture as a representation of the quirky and bizarre, due to their odd appearance and design aesthetics and for their kitsch, retro-futurist elements.  Film and television characters in early diving suits have appeared in cult productions, think the Ghost of Captain Cutler in Scooby Doo – this eerie, glowing and growling deep sea diver is of the show’s most popular villains (Below: Captain Cutler in SCOOBY-DOO 2: MONSTERS UNLEASHED, 2004, (c) Warner Brothers/courtesy Everett Collection).

For anyone enchanted by the exploration of the undersea world and have an appreciation for unusual design; the photographs and illustrations of early diving suits held by the Mary Evans Picture Library are a joy to behold.

Above: French inventor Freminet’s ‘Machine Hydrostatique’ which incorporates something like a  modern diving suit combined  with an air tank.  Engraving by an unnamed artist in Pesce, ‘Navigation sous- marine’, 1772.

Right: A state-of-the-art diving suit of the late 19th century, made of rubber and fitted with an emergency air tank, just in case the unthinkable should happen… Engraving by an unnamed artist in Louis Figuier, ‘Merveilles de la science’ volume four, page 655, 1875.

Left: Diving suit designed for work on the ‘Lusitania’, sunk during World War One and lying at a depth of 80 metres.  Unnamed artist in ‘Le Petit Journal’ 17 December 1922

Right: Divers explore the wrecks of vessels torpedoed during World War One: the amazing suit on the left is specially designed for very deep dives.  Unnamed artist in ‘Le Petit Journal’ 23 May 1920. Above: A German deep-sea diving suit brought from Kiel for examining the lost submarine ‘M1’. On 21 November 1925, while on an exercise in the English Channel. The ‘M1’ submarine sank with the loss of her entire crew, the crew members appear to have tried to escape by flooding the interior and opening the escape hatch, but their bodies were never found. At the time the submarine was lying too deep to use ordinary diving apparatus. So the decision was made to ask for the assistance of Messrs. Neufeldt and Kuhnke, of Kiel, who specialized in deep-sea diving apparatus.

Left: A diver in an iron diving suit developed by a German company in Kiel, seen here being lowered into the sea, 1922.

Centre: A diver in an electrically controlled metal diving suit attached to a cable, ready to be lowered into the sea, c. 1924.

Right: A diver in a special iron diving suit is lowered into the sea attached to a cable, c. 1920.

Centre: A man holds up a rubber diving suit used during one of many salvage operations of HMS Lutine, which sank off the Dutch coast during a storm in 1799. Photograph c. 1934.

Above: A German underwater photographer struggles to get into his rubber diving suit, with a little help from his friends. Unattributed photograph for Barnaby’s Studios Ltd c. 1930s.

Above: William Walker, diver, who worked under Winchester Cathedral between 1906 and 1912.