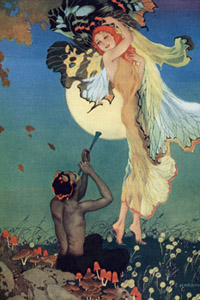 On 15th January 1920, the Pan Ball was held at Covent Garden in aid of Bart’s Hospital. Among the attendees were the actresses Betty Chester, who came as a Bacchante, and sisters Iris and Viola Tree in the costumes of a futurist Pan and tree nymph respectively. The ball’s theme of Pan, Greek God of pastures, forests and flocks, was to be one which would dominate the early 1920s. The ball had been organised by a new magazine, launched a couple of months earlier. Pan described itself as ‘a journal for saints and cynics’ and was devoted to a light-hearted confection of entertainment, gossip, wit and illustration aimed at creative and bohemian readership. Very much in tune with the fresh, post-war vogue for celebrating youth and vitality, the magazine attracted some of the finest artistic and literary talent. Covers were designed variously by Herbert Pizer, William Barribal, Wilton Williams, H. M. Bateman and Tom Purvis; writers included E. F. Benson, Reginald Arkell and the gossip columnist Olivia Maitland Davidson, who had famously written the ‘Letters of Eve’ column in The Tatler magazine. Pan’s influence saturated every aspect of the magazine. The editor’s letter was replaced by ‘Pan’s Parable’; another column was entitled, ‘Pan’s Pipings’ while the women’s fashion page was known as ‘My Box’ by Pandora.

Miss Iris Tree as a futurist Pan, Miss Viola Tree as a tree nymph and Miss Betty Chester as a Bacchante, all guests at the themed ‘Pan’ Ball held at Covent Garden in aid of Bart’s Hospital in January 1920. The theme of Pan was hugely popular during the 1920s and the ball was organised by the newly launched, but fairly short-lived, Pan magazine.

If Pan represented the 1920s enthusiasm for the cult of Pan, it was not the only magazine to recognise the god as a potent emblem of the times. Other titles such as The Bystander and The Sketch frequently published pictures casting modern day flappers in sylvan landscapes, their innocent ramble or solitary reading session suddenly interrupted by the appearance of a hairy-haunched, cloven-hoofed companion with a lascivious expression signalling a mind that was as horny as his forehead. He made an unnerving suitor, stalking his prey through mountains and wooded glades, or even materialising as an apparition in suburban gardens, blowing seductive and hypnotising melodies on his pan-pipes, which, as legend has it, were fashioned from reeds into which the nymph Syrinx was transformed when fleeing from his amorous advances. The contrast of animal legs, naked torso and virile hirsuteness with the pristine, bobbed neatness of the 1920s female, make such scenarios as erotically charged as they are repellent. Other scenes are less disquieting – sometimes a more boyish Pan entertains fairy-like nymphs, or fauns and satyrs caper with bright, young things on a golf course. Nevertheless, the themes closely associated with Pan, those of spring, fecundity and a lusty vigour for life, offered illustrators endless inspiration.

Pan­—and associated mythological figures—had been popular with artists over the centuries, but the renaissance of Pan in the 1920s owed a debt in part to the arrival of Sergei Diaghilev’s Ballets Russes in London in 1912. The combination of dazzling costumes and sets by Leon Bakst, music by Claude Debussy and an animalistic, muscular performance by Nijinsky in L’Après-midi d’un Faune (Afternoon of the Faun) were a sensation. Inspired by the designs on Grecian urns and vases, Faun was considered one of the first modern ballets, its inescapable erotic sub-text imprinting itself firmly in the minds of those who witnessed it and triggering a cult of Pan that quietly gathered followers throughout the war years. Grecian-style, bare-footed dancing under the tutelage of pioneers such as Margaret Morris and Isadora Duncan became increasingly popular, and many fashion and hair styles among women frequently took inspiration from the Classical era. By the end of the war, as society looked ahead to a new, more optimistic decade, Pan and his followers had found the perfect time to flower.

In September 1923, L’Après-midi d’un Faune was due to be adapted into a film with screen idol Rudolf Valentino in the starring role. The Sketch magazine printed a publicity shot of Valentino on its front cover, dressed in costume as the faun, his chest bare and burnished, his gaze sultry as his lips grazed his panpipes. Considering the magnetic effect the star had on the cinema-going public, it was an inspired casting decision that may very well have sent the world Pan-crazy. Unfortunately, though the script was written, the film was never produced and by the late 1920s, the cult of Pan, and the memories of the Ballets Russes were beginning to fade.

Vaslav Nijinsky, in the title role in AFTERNOON OF A FAUN, 1912. Rudolph Valentino as a faun, 1923

Pan’s star may very well rise again. Indeed, perhaps he never went away. One verse from Panache’s 1920 poem ‘Pan and Peter Pan’, celebrating the immortal god’s irrepressible lust for life, is as relevant now as when it was written.

Do you think that Pan is dead

Or his lusty years are sped?

When the midnight hour is ticking

And be thankful – PAN is in it!