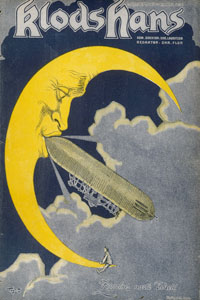 “Do not swear by the moon, for she changes constantly. Then your love would also change.” ― William Shakespeare, Romeo and Juliet

Throughout history, the moon has held a particular place of importance throughout societies, sometimes as a God, sometimes a protector, sometimes the harbinger of change, sometimes a fantastic land of opportunity. As the 50th Anniversary of the Apollo 11 Moon Landing approaches, it seems an ideal opportunity to take a haphazard low-gravity leap into the varied and fascinating references to “La Lune” to be discovered amongst the picture collections here at the Mary Evans Picture Library and see how perceptions of our closest astronomical body have evolved over time.

As a very young child, I was apparently rather taken by the Nursery rhyme ‘Hey Diddle Diddle’, a delightful panoply of surprising events, none more so than the cow, who suddenly decides the only way to react to seeing a cat strike up a tune on a fiddle was to take a leap right over the moon. This rhyme, and many other illustrative references in children’s literature, cast the moon as a benevolent and friendly character and one always close to hand or certainly not too far away to jump over. Baron Munchausen, a fictional German nobleman created by the German writer Rudolf Erich Raspe in 1785 was able to climb up to the moon on a rope and in nursery and fairy tales the moon often takes on the fully anthropomorphic identity as the ‘Man in the Moon’. The origin of this representation is embedded in longstanding European traditions that the ‘man’ was banished to the Moon for some crime. Some Germanic cultures thought he was a man caught stealing from a neighbour’s hedgerow to repair his own and a Roman legend alludes to a sheep-thief banished into the heavens. One further medieval Christian tradition claims him to be Cain, the Wanderer, forever doomed to circle the Earth.

A popular Biblical illustration shows Joshua beseeching God to command the moon to stand still to extend daylight as he defended the city of Gibeon against the five kings of the Amorites. Other traditional cultures placed the moon as a key facet of their mythologies and beliefs, with representations of the moon’s ‘face’ appearing in varied material culture, from totemic carvings to masks and paintings. A superb Inuit mask, used in shamanistic rites, bears the (sad) face of the Moon set in a white sky with attached feathers representing stars. Norse myths went further than visual representations, touching on the transit of the heavenly bodies – as wolves Skoll (repulsion) and Hati (hate) pursue Sol (sun) and Mani (moon) across the skies; if they should catch them, the world will be plunged again into darkness. In Greek legends, the savage monster the Nemean Lion fell from the moon to the Peloponnese (Greece) as the offspring of Zeus and Selene and in the later Roman pantheon, the Goddess Luna provides a divine embodiment of the Moon, riding across the sky in a two-yoke chariot.

On August 25, 1835, The Sun, a New York newspaper, published the first of six articles about the supposed discovery of life and even civilization on the Moon, falsely attributed to Astronomer Sir John Herschel. These articles became known as the “Great Moon Hoax” and described fantastic creatures living on the Moon surface alongside bat-like winged humanoids (“Vespertilio-homo”) who had built temples. The articles seem to have been conceived both to create a sensational story to increase sales of The Sun, whilst also ridiculing and satirising some of the more extravagant astronomical theories that had recently been published, such as the outlandish Universe ‘population studies’ of “The Christian Philosopher” Rev. Thomas Dick.

David Bowie’s recommendation we “Freak out in a Moonage Daydream” in 1972 was not a novel suggestion. Many references to the moon concern what one could broadly term ‘Luna Influence’ – the direct physical, geographical and social changes wrought by the passage of the moon across the sky, or the light reflected from its surface. The most well-known and oft-depicted examples of this influence are shape-shifting werewolves – savage, half-man half-wolf monsters, which appear when exposed to the light of the full moon. From early 16th century woodcuts to modern film stills, this bogeyman has gained mass recognition throughout global folklore and the Gothic horror genre. At the positive end of the spectrum in regard to luna influence is the moon’s close association with love and romance. This is best shown within our archive in a series of sheet music covers, as lovers are reflected in the moon’s surface, couples stand bathed in a loving lunar glow and ‘Mister Moon’ has the envious (or confusing) privilege of having a ‘Million Sweethearts’!

The Moon is the 18th trump or ‘Major Arcana card’ in most traditional Tarot decks, used in game playing as well as in divination. The card itself shows a night scene with a frowning (sometimes annoyed) moon gazing downward between two large pillars. A wolf and a dog look upward howling as a crayfish appears out of a pool. This assemblage is today almost indistinguishable from the centuries-old Tarot de Marseille pattern, showing a clear purpose in the representation of the card by occultists. The card’s interpretations deal with a fear and anxiety of the moon as well as feelings of inspiration and enchantment which it radiates – all aspects which are mirrored in traditional interpretations of luna influence.

Different means to achieve the “giant leap for mankind” by reaching the lunar surface have been suggested in literature, mythology, folklore and on the big screen in myriad different ways. These include travelling by Zeppelin, sailing boat or rudimentary rocket craft. The 17th century traveller Domingo Gonzalez allegedly reached the Moon by accident, towed there by trained swans (their place of hibernation). Jules Verne in his 1865 novel ‘De la Terre a la Lune’ (‘From the Earth to the Moon’) proposed a giant gun to fire a moon rocket from the earth. Although his means of atmospheric departure may have been a little off-course, his suggestion that man would travel in a small capsule which would ultimately return to earth by splashing down in the ocean was remarkably prescient.

It was of course not until July 20, 1969 at 20:17 UTC that finally the dreams, stories and legends finally became reality as Commander Neil Armstrong and lunar module pilot Buzz Aldrin landed the Apollo Lunar Module Eagle on the moon’s surface, bringing our fascination with our permanent natural satellite full circle.