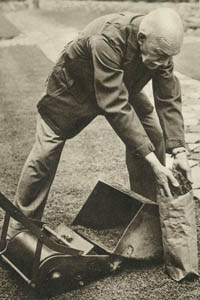 This of course, was a far more pressing question eighty years ago in the first few months of the Second World War, when memories of food control and rationing towards the end of the last war, meant most people were prepared for the inevitability of food shortages.

It was a scenario for which Mr J. R.B. Branson of Battersea was thoroughly prepared.  A retired lawyer and graduate of Trinity College, Cambridge, Mr. Branson felt the dietary requirements of the nation on the home front could be met by the green, green grass of home – quite literally.

In November 1939, Branson was featured in The Bystander magazine in a photo spread proving his theory that humans could subsist adequately on grass. He was shown carefully transferring lawn cuttings into a paper bag, washing and preparing grass and then pointing out a number of boxes, each neatly labelled with a particular vintage of dried grass. “Bowling Green Short 1938” sounds particularly appetising.

Another photograph shows him mixing grass with sugar and then wandering happily around his garden masticating on a bowlful.  He claimed, at the age of sixty-seven, to have never felt better and to prove the point, was photographed on his daily 6am run around Wandsworth Common.

A final picture of a bowl of grass was pithily captioned by The Bystander: “”We hope German propagandists don’t see this picture”.

So if the thought of post-Brexit chlorinated chicken makes you recoil, then perhaps go one better than becoming vegan and give the great grass diet a go. Mr J. H. P. Branson clearly thrived on it!

If you can’t get enough of Mr Branson and his turf-tastic chow-down, you can see more in this brilliant Pathé clip: https://www.britishpathe.com/video/the-man-who-eats-grass