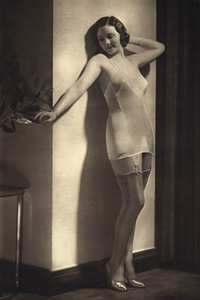 The first publicity slogan for underwear appeared in the window of a London corset-maker during the 18th century, promoting the efficacious results bestowed by her latest model of corset claiming it, ‘controls the large, supports the small, uplifts the drooping.’ Almost three centuries on, a quick stroll around the lingerie section of M&S suggests that we all still want pretty much the same results from our foundation wear, although admittedly, a medieval or even 18th century drapers would not have sold many pairs of knickers. Most people simply didn’t see the point of wearing them.

Legend has it that the corset as we know it–the type that shrinks a woman’s waist to doll-like proportions with the aid of whalebone, lacing and no small amount of discomfort–was first introduced by Catherine de Medici during the 16th century. She decreed that any of her ladies with a waist wider than 13 inches would not be welcome at the French court. Rather than face banishment, they breathed in, visited a stay-maker and politely said, ‘Non, merci’ to proffered sweetmeats. After the medieval fashion for rounded, feminine stomachs, suddenly the tummy was tucked away and the waist accentuated, a trend that endured, save for a short breather (literally) during the Empire line fashions of the Regency era, until the First World War. Over the centuries, corsets or ‘stays’ changed along with the vagaries of fashion from the sharp, flat-fronted bodices of the Tudor period to the wasp-waisted fetish of the Victorian era and the exaggerated S-bend shape of the early 20th century. The wealthier the wearer, the more restricted she was likely to be, but mobility was only necessary for those who had to work for a living and as Georgiana, the Duchess of Devonshire confessed, although she was pinched and sore, the soothing quality of admiration made it bearable. Corsetry was not limited to the female market either with dandies of the 18th century particularly fond of the garment’s figure-transforming qualities. In 1834, the increasingly plump Prince Regent was told his stays would be the death of him if he continued to wear them.

Just prior to the Great War, fashion suddenly became more daring–looser, artistic, diaphanous. In 1913, a New York socialite called Mary Phelps Jacob passed into the annals of underwear history when she was awarded a patent for her invention of the first modern brassiere. Frustrated at the lumpen artifice of her whalebone corset underneath a particularly sheer evening dress, Jacob fashioned a makeshift bra out of two silk handkerchiefs and some pink ribbon. This charming creation quickly became popular, with its inventor opting to sell her patent to Warner Bros. Corset Company for $1500. Warner’s went on to make $15 million from it.

But women were never truly truss-free; restrictive underwear still moulded and shaped women’s figures according to style edicts of the 20th century. Twenties’ lingerie was lovely to linger over: silken and suggestive, but the slim-line fashions of the following decade required a sinuous figure to carry them off. Underwear firms such as Kestos offered girdles and corsetry-inspired foundation garments to ensure a lean silhouette under everything from one’s bias cut Molyneux evening gown to a flying suit. The war years required more practical solutions and warm woollen undies together with a scarcity of stockings meant that only pin-up girls emerging from an artist’s brush, unencumbered by ration coupons, could afford the silk fripperies that her flesh and blood sisters so desired. After the war, Dior’s New Look returned once more to the hourglass outline and cinched waists of the 19th century; waspies, corsets and conical bras gave the desired look with advertisements in women’s magazines posing questions that would provoke a public outcry today. One, for Au Fait, insists, ‘What’s the fun of being a woman if you don’t have a good figure?’

In riposte, some women burned their bras in the sixties, but most inevitably still felt the need for some support. Hip, youthful fashion began to eclipse the ladylike styles of the fifties and underwear followed suit. In the 1970s, Janet Reger was an underwear trailblazer, combining comfort, luxury and sex in silk, satin and lace for discerning women – and men who could rely on the store’s dubious policy of maintaining absolute discretion when someone might be buying for a mistress rather than a wife.

The choice of underwear on display today would bewilder even the most seasoned Victorian courtesan, but the current vogue for the derivative, early 20th century burlesque styles pedalled by high-end boutiques such as Agent Provacateur shows that lingerie designers are continuing to plunder the past for inspiration. Thankfully, bloomers have yet to enjoy a revival. Pants to that!