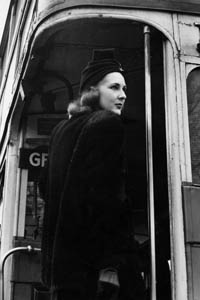 In 1946, photographer Jean Straker formed a short-lived photographic firm known as Photo Union at 12, Soho Square in London. It specialised in the photo-essay, a form of pictorial journalism undertaken mainly with miniature cameras with lots of detailed images and bridging shots. Four years later, in 1951, the agency went into receivership when Straker sank capital into colour photography, which was to prove too costly. The archive, now at Mary Evans, consequently documents a particularly brief period of time but in many ways, it is all the more fascinating for it.

Jean Straker was born in London in 1913 to an émigré Russian father and English ballerina mother. He began his career in journalism during the 1930s, specialising in film and launching ‘The Talkie’ magazine. A conscientious objector during the War, he combined duties as an ARP warden with working as a surgical photographer in London’s hospitals. But it was in the 1950s, that fame—or perhaps infamy—finally found a foothold. With the failure of Photo Union, Straker abandoned commercial photography to pursue personally satisfying projects. He set up the Visual Arts Club and as part of this, organised nude photography sessions for members. In 1959, ‘The Nudes of Jean Straker’ was published by Charles Skilton Publications, one of the first art photography books of its kind. Despite his activities being pretty similar in practice to life drawing classes, sensibilities were shocked and he was prosecuted in 1962 under the Obscene Publications Act. Arguing that there was nothing depraved or corrupt about the naked human body, Straker spent the rest of the decade refusing to curtail his activities or compromise his artistic integrity leading to a continuous cycle of prosecutions and appeals. By the late 1960s, Straker had given up photography but continued to campaign and lecture on censorship until his death in 1984.

Though Straker’s Photo Union collective was a commercial venture, whose subjects were necessarily more conservative, some of the images seem to hint at Straker’s background and personal interests. There are backstage shots of showgirls and candid shots of jobbing musicians, evocative images of Soho streets and long-gone West End restaurants while guileful London girls are pictured on dates with American GIs. They hint of freedom and a certain type of seedy glamour in an age of rationing and austerity. There are other pictures too, which project a more innocent nostalgia: apprentice carpenters, Kentish apple pickers and the 1947 Royal Wedding. But occasionally, the odd, artistic nude reveals the agency founder’s true, fleshy metier. The Photo Union collection is an eclectic and evocative picture of post-war Britain, and particularly London.  To see a selection of images from the archive on the Mary Evans website, click here.