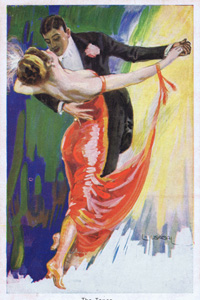 With a new series of Strictly Come Dancing on our screens, we’ve taken an in-depth look at the original tango craze of 1913.

“Everybody’s doing the Tango, learning the Tango, talking the Tango or watching the Tango. Never, perhaps, has a dance become of such universal interest so quickly…” Thus opined The Sketch in November 1913, reflecting upon the incredible international popularity of ‘tango tea’ dance fever.

The craze for the Argentine tango in its latest incarnation began in Paris in 1912 as the thé dansant, so named from the practice of taking tea as a refresher between dances. The tango tea was rapturously embraced by Parisians of all classes, causing the caricaturist Sem to re-christen the capital ‘Tangoville’, and it wasn’t long before the trend had swept across Europe and beyond.

It’s difficult to over emphasize how enormously popular the tango tea had become by 1913. The prodigious coverage on all aspects of the craze in the illustrated magazines in our archive reveals a world in the throes of tangomania. Whether it was tango teas held at fashionable hotels, the latest steps explained or mocked, reviews of tango ‘exhibitions’ at the theatre or novelties such as tango dancing on roller skates,  the tango was everywhere.

Manufacturers embraced any opportunity, however tenuous, to ally their products to any aspect of the lucrative craze. Tango-legend has it that one enterprising dressmaker found himself with a glut of orange fabric, and taking advantage of the mania, re-named the colour “tango”, making it an instant hit. Adverts in the press plugged tango lessons, gramophone records and sheet music –and even tango boot polish.

However, the craze brought much more to the world than just a great merchandising opportunity: it also brought liberation. The new ‘tango’ corsets that offered increased flexibility, and skirts and even trousers that left feet clear for dancing, were designed to give women the freedom of movement required for dancing the tango properly. The physical liberation offered by the tango dress was a stark contrast to the constriction of the fashionable ‘hobble’ skirt, a big trend of 1910. Though women’s liberation would take more drastic forms in 1913 (in the same year, imprisoned suffragettes went on hunger strike, and Emily Davison threw herself under the king’s horse at Epsom Derby), the subtle changes wrought by the tango echo those elsewhere in society at that time.

Everyone may have been talking about the tango, but it wasn’t all praise. Boycotted by some religious groups, the tango’s enemies saw not liberation, but moral degeneration. Unlike the more traditional dances of the period, the tango hold was an intimate embrace, which was perceived by some to have a corrupting influence. For an “unnamed peeress”, who wrote to The Times in disgust in May 1913, the dance was full of “scandalous travesties”.  The Illustrated London News cheerfully combined extracts of this letter with a retrospective on the polka, a dance which was also greeted with disgust in 1844, but went on to be widely adopted, and by 1913 was regarded as thoroughly tame.

As 1914 progressed, the passionate fervour for all-things-tango had begun to cool. Even before the First World War had begun, the dazzling magnesium flash of the tango tea had, almost as suddenly as it had burst onto the scene in Paris, burnt out. It was to survive, albeit in a different incarnation, to dance another day.