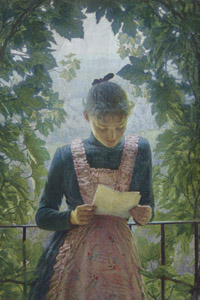 The agony column is not a new phenomenon. Back in the 19th century, earnest readers of The Girl’s Own Paper wrote in to the weekly publication under pseudonyms asking for advice on all manner of problems. It’s unlikely that many girls today concern themselves with pressing issues such as how to remove ink stains from ivory piano keys, the correct etiquette of visiting cards, or, thankfully, how to remove a boil from the eyeball.

The advice they received in the ‘Answers to Correspondents’ page was prescriptive, stern, sometimes harsh and often astonishingly encyclopaedic. Any indiscretions involving the opposite sex were severely reprimanded, while those with poor handwriting usually suffered a withering critique.

The questions themselves were never printed which make many of the answers all the more intriguing, and, we have to admit, occasionally hysterical.  Whoever the Girl’s Own agony aunt was, she refused to suffer fools gladly and her advice perhaps tells us more than many other contemporary sources what life must have been like for a middle class girl in the 1890s.

ALICE. – A crayon copy is not eligible for exhibition at the Royal Academy.

MADGE. – Yes, there is a verse in the Bible that has all the letters of the alphabet in it. See Ezra vii. 21.

A DALSTONIAN. – Why do you wish to whiten your face and neck? Of course you could dip your face in a flour-barrel, or get some whitewash applied by the cook next time she whitens the scullery. But what a coarse, orange-peel-looking skin you will soon have if you fill up the pores of the face!

BLACK TOM. – 1. The girl you name as being hopelessly attached to a man she has never met but only seen at concerts, should be sent away from the foreign town where you are both staying. The story is of a most humiliating character; she disgraces the sex, the members of which should be sought, not themselves the seekers. 2. We could not hazard an opinion on what was your disease. Your writing slopes the wrong way.

ALYS and MABELLE. – ‘Nigel’ is pronounced as it is spelt; the last syllable as the first in ‘gelatine’.

WORRIED (but not) TO DEATH. – We know nothing of the method advertised. We can only advise you not to try it without the opinion of your own family doctor.

PUSSIE. – We cannot tell you of the diseases induced by the bad habit of eating anything not designed for food. You must be already in a very unwholesome condition. The best means of curing yourself would be to tell your mother, and request her to put a stop to it at once, if you have no strength of mind and will to cure yourself of such nasty habits.

MARJORIE. – 1. Your heliotrope dress will probably fade if you wash it. 2. To raise his hat on the first meeting is all that is required of a man. To do so five or six times would be ridiculous.