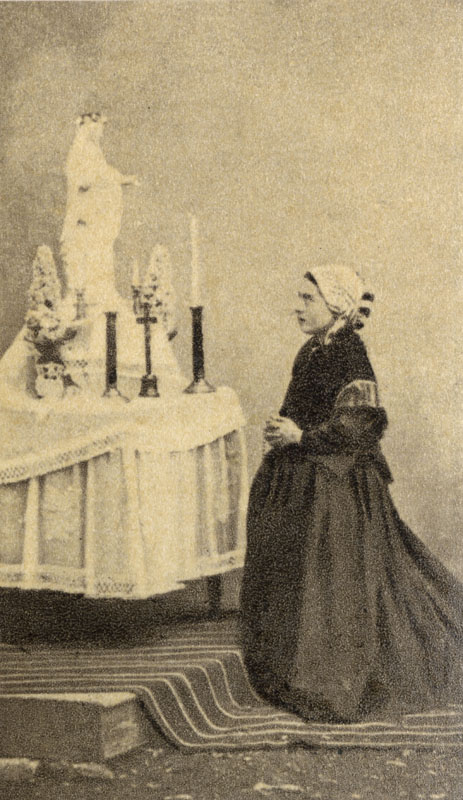 Time is a candle burning down, rural France, 1858

ready to take impressions. I agree she was white as a candle.

The whitest candle was made from spermaceti wax, mined from

inside a sperm whaleâ€™s head. Translucent as the tubercular skin

of Bernadette. Tallow, which stank, made from beef or mutton fat,

was the candle of hovels; resin lit the almost-cave of Bernadetteâ€™s home.

No-one compared the saint to beeswax, used in church, scentful but yellow.

Children like Bernadette were so meagre they nibbled church candles

on the sly, to fill their bellies. You can catch someoneâ€™s soul

in a candle, then snuff it out. And if you wish to lift a curse, stick pins

in a candle. Peasants held back their kitchen fat (bone, oil, skin)

for the chandler whoâ€™d journey door to door, form it into candles.

will not be invented until 1879, the year Bernadette dies which is why

Iâ€™d never compare her to that. Theyâ€™ll coat her in wax, preserve her in time.

Flick a switch: she may not exist at all when our eyes fill with electric light.

Â© Anna Kisby, inspired by Lourdes by Ruth Harris, and written as part of the Bristol University project Creative Histories of Witchcraft 1790-1940 (a collaboration between a historian, a playwright and a poet)

Anna Kisby is a Devon-based poet, archivist and author of the pamphlet All the Naked Daughters (Against the Grain Press, 2017). She won the Binsted Prize 2019, the BBC Proms Poetry Prize 2016 and was commended in the Faber New Poets Scheme. She is currently a Research Associate in Creative Writing at Bristol University on the projectÂ Creative Histories of Witchcraft 1790-1940.