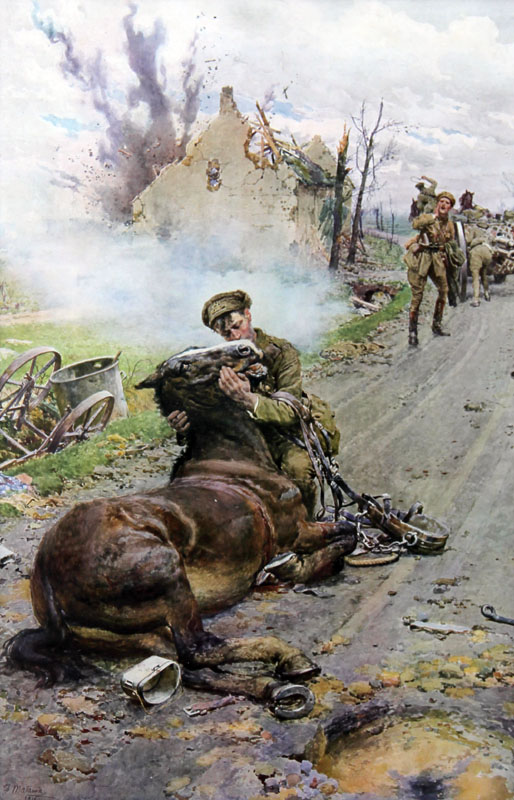 Only a man! He is more. Shift the gear,

slip the weight from his shoulders, his jaw

stiffening. Saddle beside him, let the smoke clear

as hoofs and bullets thunder. Pause.

with quivering lips. Do not fail;

a horseâ€™s truth is revealed in faithful eyes.

United, gallop strong through the veils.

â€“ heedless of your mutual pains â€“ to safety. The shells

may soften, though the flesh may bleed.

Keep walking, though you both may fall.

Only a man! No, this is companionship. Kneel

close for comfort. Let him sigh

in human airs. Be his steed, his steel

when he kisses friends goodbye.

At night, nudge his head to the stars,

show him how the universe unfolds.

We bear so much â€“ breed kindness and resilience, far

beyond the kingâ€™s shilling or war-tethered gold.

Russell Jones is an Edinburgh-based writer and editor. He was the UKâ€™s first Pet Poet Laureate, has published five collections of poetry and is deputy editor of Shoreline of Infinity, a science fiction magazine. He is the editor of Where Rockets Burn Through: Contemporary Science Fiction Poems from the UK (Penned in the Margins), co-editor of Umbrellas of Edinburgh: Poetry and Prose Inspired by Scotlandâ€™s Capital City (Stirling Publishing) and Multiverse: an international anthology of science fiction poetry (Shoreline of Infinity). Russell writes novels, short stories for children, and has a PhD in Creative Writing from The University of Edinburgh. He enjoys White Russians, Twiglets and karaoke.