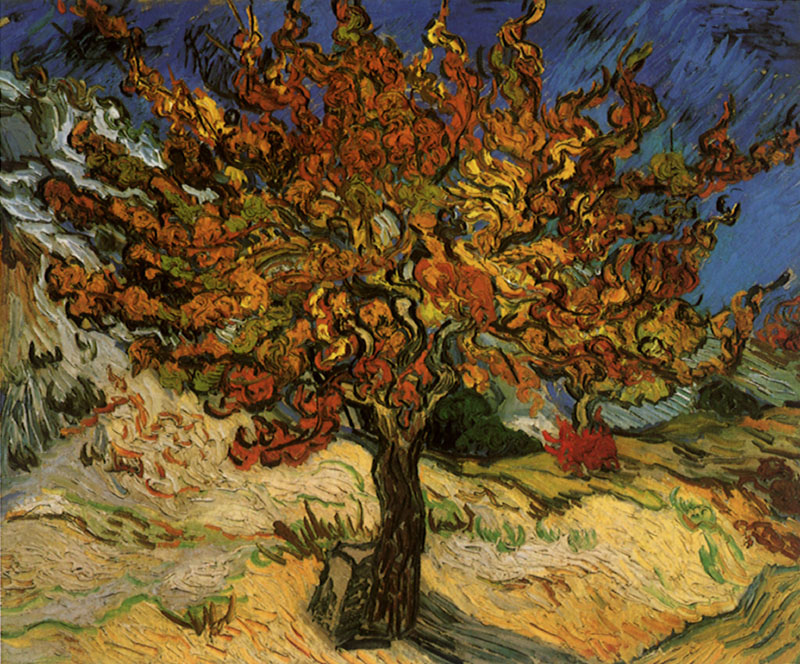 I am the mulberry tree, ablaze with color

before the last day of autumn

I came into being in a flurry of brush strokes

on a cardboard, under the azure expanse of unfinished sky

green â€“ into chartreuse â€“ into amber â€“ into gold

buds into blossoms â€“ into fruit â€“ into earth

The brightest star, an ancient supernova,

I am aglow but for a moment

I outshine reality with artifice

exploding off the canvas

I make magic of the mundane shape of the world

once captured in a frenzy of light, becoming

time transfigured into swirls of awareness

crystallizing at the edge of oblivion

let my song fill your day till it glows â€“

become pure gold with me

Maja Trochimczyk, PhD,Â is a Polish American poet, music historian, photographer, and author of seven books on music, most recentlyÂ FrÃ©dÃ©ric Chopin: A Research and Information GuideÂ (co-edited with William Smialek, 2015) and GÃ³recki in Context: Essays on MusicÂ (2017). Her eight poetry volumes include three anthologies, Chopin with CherriesÂ (2010), Meditations on Divine NamesÂ (2011), and Grateful Conversations (co-edited with Kathi Stafford, 2018), as well asÂ Rose Always, Miriamâ€™s Iris, Into Light,Â and two prizewinning books based on Polish experiences of WW2:Â Slicing the BreadÂ (2014) andÂ The Rainy BreadÂ (2016). A former Poet Laureate of Sunland-Tujunga, she is the founder of Moonrise Press, President of the California State Poetry Society, President of Helena Modjeska Art and Culture Club promoting Polish culture, and Board Secretary/Communications Director of the Polish American Historical Association.Â HundredsÂ of her poems, articles and book chapters have appeared in English, Polish, and other languages. She has read papers at nearly 90 international conferences and received many awards from Polish, Canadian and American institutions, such as the American Council of Learned Societies, the Polish Ministry of Culture, PAHA, McGill University, and the University of Southern California. She spends her weekdays as Senior Director of Planning and Development at Phoenix House California, a behavioural health non-profit agency.Â  trochimczyk.net