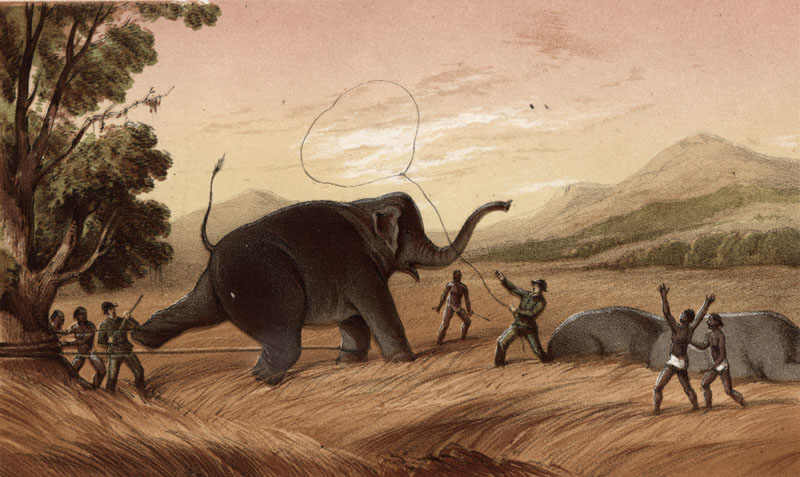 The laughter of slaughter

â€˜I took a shot-gun and strolled along the banks of the lake. The snipe were innumerable, and I killed them till my head ached with the constant recoil of the gunâ€¦â€™ (The Rifle and the Hound, Sir Samuel Baker, 1853 – he killed more than 3000 elephants in Sri Lanka during the 1850s)

with their pale speckled faces were disgusting.

He preferred to shoot them

from behind trees, not in open ground,

but up in the mountains

He chased them on horseback,

considered it only sportsmanlike

to stand in the way of danger – just a bit –

so heâ€™d shoot females in the forehead

as they turned to charge him

in defence of their young,

leaving their poonchies alone to starve

if they got away.

He lived for the frisson of kill,

watching the creature buckle and drop,

admiring the accuracy of his bullet,

the relief when the Ceylonese gun-bearer

placed a newly loaded rifle in his grip.

Retracing his route he rejoiced to note

whole herds rotting in his footsteps.

Rebecca GethinÂ has written five poetry publications and has been a Hawthornden Fellow and a Poetry School tutor. MessagesÂ  was a winner in the first Coast to Coast to Coast pamphlet competition.Â Vanishings from Palewell Press and a chapbook called Fathom from Marble are forthcoming in 2020. She edited A Poetry of Elephants, an anthology of poems to raise money for DSWT, an elephant orphanage in Kenya which was shortlisted for a Saboteur Award.