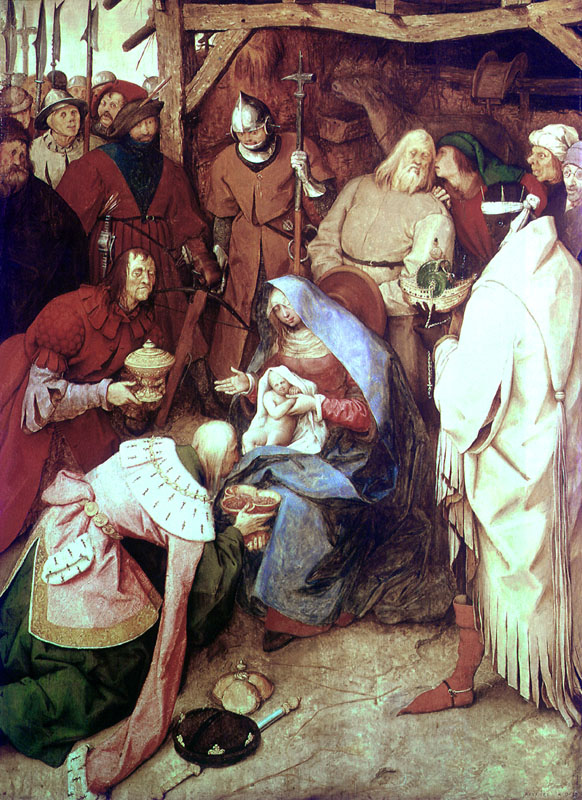 The adoration of the kings

after Pieter Bruegel the Elder

Everything looks rough-hewn and doltish

and has done since my eyes

began to betray me unreliably now I peer

through thick blue saucers of glass

yet feel how these strangers stir usâ€”

this one with the pinched face of a carpenter

more than king though the bold red

of his sleeves and collar and the aureate bowl

his fingers dandle appear to be rich indeed

and wholly out of place in our stable yard

where we find this squalling child

reluctant and bollock-naked as far as I see

then this older one with his lank grey hair

stooping as if to show off his ermine trim

and his extraordinarily long pink sleeves

(I see them more clearly than anything else)

he positions his hat and mace in the dirt

to offer something I canâ€™t make out

beside me the black skin and sharp leather smell

of the third who proffers an elaborate gift

of green and yellowâ€”it must be gold and jade

yet smells sweetly of spices to me

and I can tell you Iâ€™m good with odours

even better with my ears which are sharp enough

to trace the munching commentary

of the ass in the byre the shifting of the crowd

and the hiss of doltish Piet with his lips

to the poor fatherâ€™s ear telling him I suppose

what we all know of the difference

in their ages and the ominous signs

from the fractious boy even the fact the child

in his green snood has never been one to look

beyond the obvious not one to let gossip

go abegging yet the motherâ€™s face has

turned now half-obscured as if she wants us

to believe thereâ€™s something in all this

not the sighted nor the blind can fathom

some secret she and her strangers are keeping

Â© Martyn Crucefix, from Spring of the Muses: the poetry of music, art and dance, ed. Deborah Gaye (Avalanche Books, 2019)

Martyn Crucefixâ€™s recent publications are Cargo of Limbs (Hercules Editions, 2019), These Numbered Days, translations of the poems of Peter Huchel (Shearsman, 2019) and The Lovely Disciplines (Seren, 2017). O. at the Edge of the Gorge, was also published by Guillemot Press in 2017. Martyn has translated the Duino Elegies â€“ shortlisted for the 2007 Popescu Prize for European Poetry Translation â€“ and Sonnets to Orpheus by Rainer Maria Rilke and the Daodejing â€“ a new version in EnglishÂ (Enitharmon, 2016). He is currently a Royal Literary Fund fellow and blogs regularly on poetry, translation and teaching at http://www.martyncrucefix.com