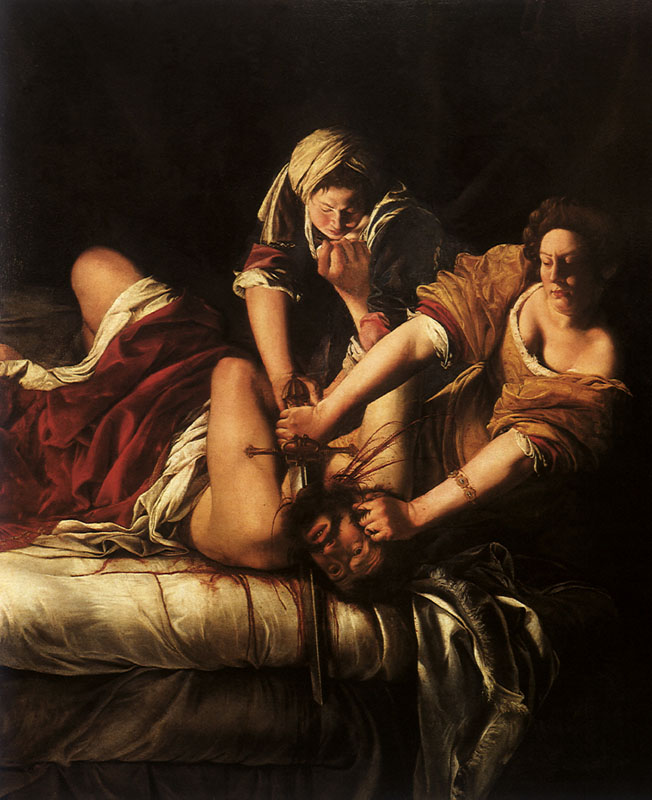 Her brush moves across the surface of the deep

to meet with rage in red jets, blood-wet shots

of justice, women with vengeance in their grip.

Teamwork: our two conspirators are caught

as silk assassins, queens of hack and spill

who, spotted at this scene of carnage, seem

so close to ecstasy, they’re beautiful.

Life gives you filth, but you can paint it clean.

Focused on this moment of release,

blessed by the spin of crimson breath

they bask in glory. Judith holds and heaves

and plunges in, making art from death.

This is a better life; she lives in it.

A woman paints herself; flagrant, illicit.

Jacqueline Saphra is a poet and playwright.Â  The Kitchen of Lovely Contraptions (flipped eye, 2011) was shortlisted for the Aldeburgh First Collection Prize and her chapbook, If I Lay on my Back I saw Nothing but Naked Women (The Emma Press, 2014), won the Saboteur award for Best Collaborative Work. In 2017, All My Mad Mothers from Nine Arches Press was shortlisted for the T.S. Eliot Prize. In the same year A Bargain with the Light: Poems after Lee Miller was published by Hercules Editions. Her most recent play, The Noises, was produced at The Old Red Lion Theatre in London in 2019. Dad, Remember You Are Dead was published by Nine Arches Press in 2019 and Veritas: Poems after Artemisia is just out from Hercules Editions. Jacqueline is a founder member of Poets for the Planet and teaches at The Poetry School. She is currently writing a sonnet a day charting a journey through lockdown. www.jacquelinesaphra.comÂ  Twitter: @jsaphra