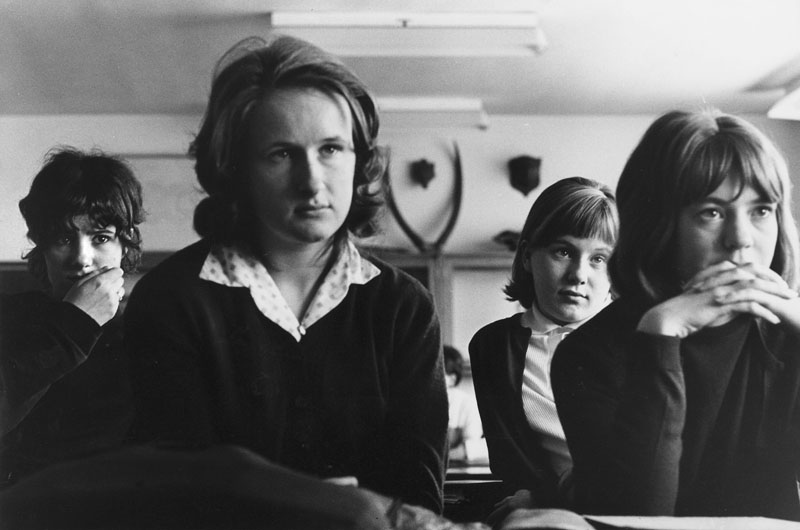 Sometimes in the middle of a class weâ€™ll stop

and look out the window. It is the highest and

biggest in the school and framed by it is a sweep

of mountain that gives a sense of the west

of the city. The little streets become beautiful

of chimneys grey below the mountainâ€™s green

and on the top a lazy orthographic cloud

will lie along it in the morning until moved

or melted by the sun. And one day thereâ€™s a fire

with the fireman up a ladder peeing his water

on a burning house and every so often a sun-burst

of white gulls will wheel upward lifting like a surprise

across the rooftops and the tall row of poplar trees

that bind the nunsâ€™ graveyard have been pollarded

stark against the winter sky and often weather

will roll in and down, rain bleaching all the colour

out to a grey blur, only for it to come back

in bright contrasts after the shower.

Maureen Boyle studied English and History at Trinity College, Dublin, and in 2005 was awarded the Masterâ€™s in Creative Writing at Queenâ€™s University Belfast. She has won various awards including the Ireland Chair of Poetry Prize and the Strokestown International Poetry Prize, both in 2007, and in 2013 she won the Fish Short Memoir Prize.Â  She has received support from the Arts Council of Northern Ireland in the form of Individual Arts, Aces and Travel Awards. In 2017 she was awarded the Ireland Chair of Poetryâ€™s Inaugural Travel Bursary for work on Anne More, the wife of John Donne. In January 2019 a long poem, â€˜Strabaneâ€™, was broadcast on BBC Radio 4 in â€˜Conversations on a Benchâ€™, and has just been published by Arlen House Press, Dublin, with photographs by Malachi Oâ€™Doherty. Her debut collection, The Work of a Winter (Arlen House, 2018), is in its second edition. She taught Creative Writing with the Open University for ten years and teaches English in St Dominicâ€™s Grammar School in Belfast.