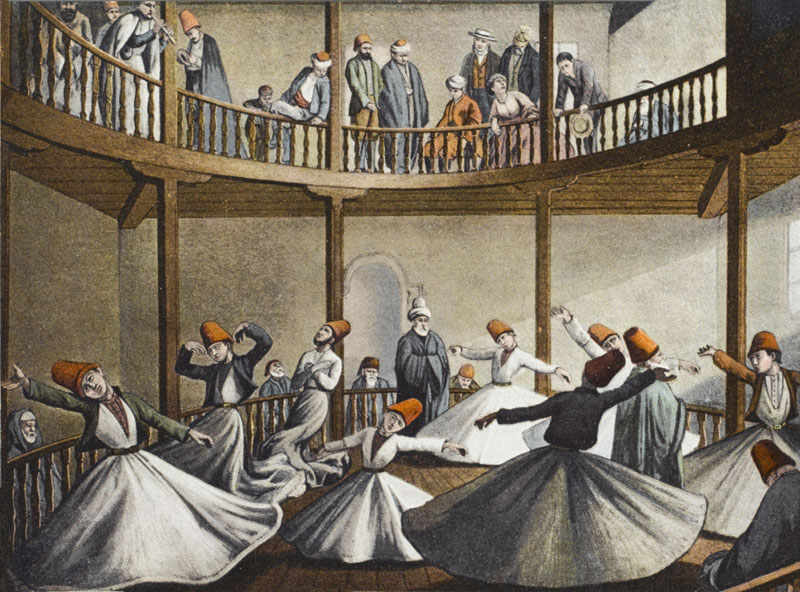 throughout the Middle East.

This stranger put a question to the scholar:
it remains one of the great mysteries.

the young scholar lost his breath and fainted.
When he came round the two talked and became

locked in a stream of endless dialogue.

Inseparable, they spoke for days without human need â€“
like two musicians riffing, each one taking over where

the other left off in a state of pure discovery.

Late one night, mid-discussion,
the friend went to attend a knock at the door

and didnâ€™t come back.

The young scholar fell silent and vowed never
to speak again unless his great friend returned.

He had fallen into what is known

as the deep well of meditation, the narrow
tunnel of mortal contemplation.

For months, not a word passed his lips.

Then on his darkest night he looked up
and let out a savage howl. As he screamed

he found a new voice forming.

The next morning, he headed to the market square
and began to speak. Poetry and parables poured out:

You are the sky my spirit circles in.

My soul is from elsewhere. He started
to sway and outstretching his arms whirled around,

some started to swoon and dissolve

into laughter, others moaned in ecstasy
and cried. One young man began writing

his every word down.

The Konya scholar had lost all simile
and became the thing itself: the lover, the beggar,

the parched earth, the unfurling flower.

He continued turning into the small hours,
his great friend returning through him.

A mute moon smiling in the wings.

Â© Adam Wyeth 2021, published in a recent anthology, The Music of What Happens, to appear in forthcoming collection about:blank

Adam Wyeth is an award-winning and critically acclaimed poet, playwright and essayist with four books published with Salmon Poetry. In 2019 he received The Kavanagh Fellowship Award. He is the author of Silent Music (Highly Commended by the UKâ€™s Forward Poetry Prize) and The Art of Dying, an Irish Times Book of the Year. In 2013 Salmon published his essays, The Hidden World of Poetry: Unravelling Celtic Mythology in Contemporary Irish Poetry. His poetry has won and been commended in many international competitions, including The Bridport Poetry Prize, The Arvon Poetry Prize and The Ballymaloe Poetry Prize. His work appears in several anthologies including The Forward Prize Anthology (Faber, 2012), The Best of Irish Poetry (Southword, 2010) and The Arvon 25th Anniversary Anthology. In 2016, he was selected for the Poetry Ireland Review‘s Rising Generation of Irish Poets. Anthologised widely, his poems have featured most recently in the New Ireland anthology, The Music of What Happens; The Ordinary Woman and Other Poems I Love (Gill Books), and The Long Poem Magazine, UK. His plays have been performed across Ireland and also in New York and Berlin. His play This Is What Happened was published by Salmon in 2019. His new work, about:blank (2021) is a large poetical sequence combining poetry, prose and dialogue, currently in production as an immersive audio work performed by the actors Owen Roe and Olwen Fouere. The work was chosen as the Abbey Theatreâ€™s Engine Room development programme; subsequently, Adam was awarded a major Arts Council Literature Project to complete the work. Adam is an Associate Artist of the Civic Theatre, Dublin, and works on ideas and research for the RTE Poetry Programme. He teaches online creative writing correspondence courses at adamwyeth.com and Fishpublishing.com.