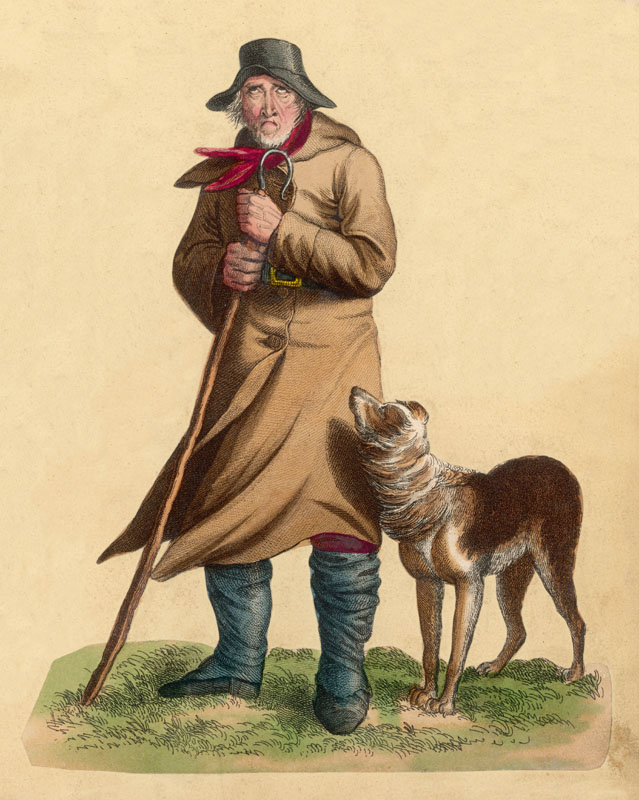 At the Sheepdog Trials

Don’t know why they watch
Dog so much. It’s us
Does it. We know
The gates, the turns,
All he does, he follows behind
Maybe to one side, big deal,
So what, and people come
From over the hills to look.
Maybe they like the way we move
All together. Takes a little practice
And have to break dog in.

Like to get round behind
Dog for once, don’t like him
Always in corner of eye
Looking shifty. Don’t think
He bites. May bite.
Don’t see how dog
Does it, just one of him
And nowt to lead.

Here he comes
In his straight black wool.
Heel!
There, it worked. Doesn’t
Always work.

first published in Below the Surface and Other Poems, 1996
Picture 10190382, hand-coloured engraving, image copyright Mary Evans / Grosvenor Prints
Sarah Lawson is a poet and translator. Born in Indianapolis in 1943, she has spent most of her adult life in London. Her poetry has appeared in numerous magazines and in her collections Below the Surface and All the Tea in China. She has published three poetry pamphlets with Hearing Eye: Down Where the Willow Is Washing Her Hair, Friends in the Country and Twelve Scenes of Malta and a collection of haiku, The Wisteriaâ€™s Children. In prose she has published A Fado for my Mother, and a memoir about Poland, The Ripple Effect. She has translated works from French, Spanish and Dutch, and is probably the only person to have translated both Christine de Pisan and Jacques PrÃ©vert. Her latest translation from French is the story of a Bengali girl who refused to get married at the age of 11, The Strength to Say No by Rekha Kalindi.