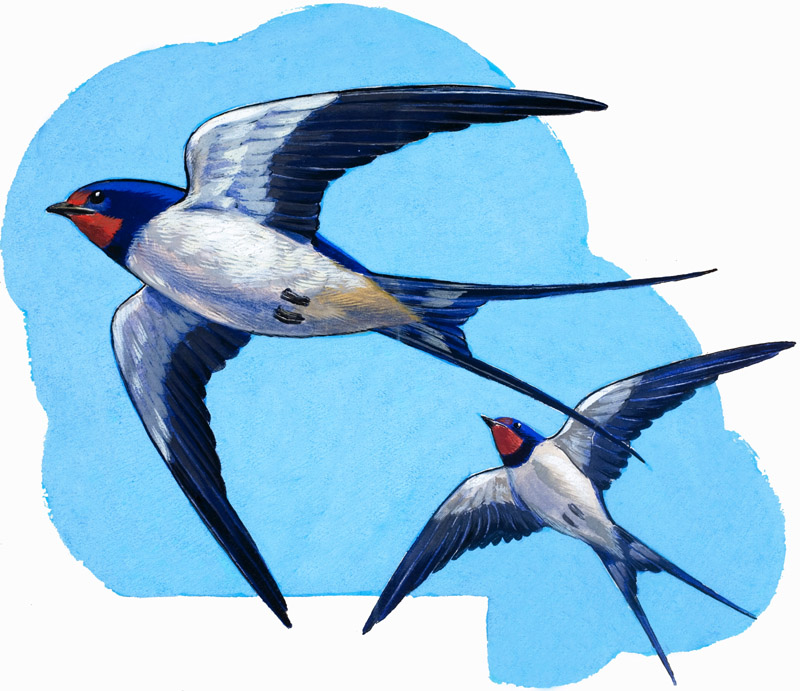 through yellow fields, now across this farmyard.

On one side of the path in the air, a twitch,

a flicker, then another flicker, winking

in and out of gaping semi-darkness.

I step aside under a towering doorway.

Up there in the gloom, among the rafters,

a concentration of blackness is stirring

around a bubbling centre of dark life.

Back at the bright entrance there are four, five,

I blunder back out into the daylight

and rejoin my companions where the path

opens on a deserted lane. Above us,

on telegraph wires in swags over a hedge,

a row of them seem queuing to be admired,

silhouetting on blue their slinky grace.

Then there are cream teas in a farm garden

while, at the periphery of vision,

shadows are swooping against walls, and beyond

whispering their music into the darkness

of memory like a nest high in a barn

they will return to, summer after summer,

into which, from the paths of careful thought,

I will step aside to be astonished

again as they explode out of nowhere,

past me, to the dazzling summer sunshine.

Â© John Freeman, first published on the website of the magazine The Lonely Crowd, also appears in What Possessed Me

John Freemanâ€™s poems have been widely published in magazines and anthologies, and in several collections, of which the most recent are What Possessed Me (Worple Press) and Strata Smith and the Anthropocene (The Knives Forks and Spoons Press), bothÂ  September 2016. Earlier collections include White Wings: New and Selected Prose Poems (Contraband Books) and The Light Is Of Love, I Think: New and Selected Poems (Stride Editions).Â  John was born in Essex and grew up in South London before living in Yorkshire and finally settling in Wales where he taught for many years at Cardiff University and now lives in the Vale of Glamorgan.Â  There is an online interview here: http://sentinelquarterly.com/2016/05/john-freeman-interviewed-by-mandy-pannett/ Â Â See also http://www.johnfreemanpoetry.co.uk/#