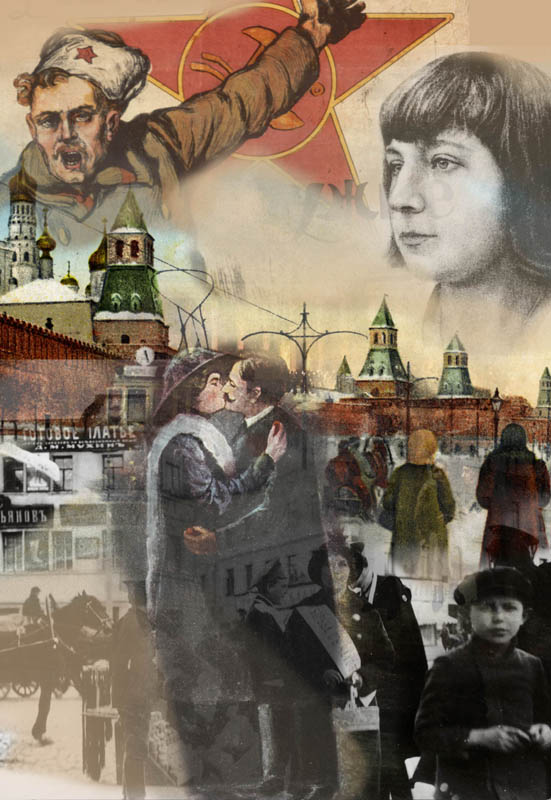 we live on streets where goodbyes are said â€“

lovers packing kisses in their luggage,

because love has a hard time in our city.

Because love has a hard time in Moscow,

I hope your man has poems in his suitcase,

we live on streets where goodbyes are said

when bread is baking in the early morning.

When bread is baking in the early morning

your yeasty kiss goes with him to exile â€“

I hope your man has poems in his suitcase

send a yeasty kiss with him to exile

soon I will follow, friends will see me off…

Soon, I will follow, friends will see me off,

‘Surround me, friends, hug me on the street’,

a quick ‘Goodbye’ but you will meet tomorrow,

the bee-hum of this city will not leave you.

The bee-hum of this city will not leave you

‘Surround me, dear friends â€“ hug me on the street!’,

a thin exile, it leapt into my brain.

A thin exile, it leapt into my brain,

on a corner in Moscow, an intersection,

when my lover packed kisses in his luggage.

Marina Tsvetaeva (1892-1941) is one of Russia’s outstanding poets of the twentieth century. Her husband, Sergei Efron (1893-1941), left Moscow in 1922 several years before her. She meant to leave but circumstances kept her in Moscow where she experienced famine and her two-year-old daughter died. She left Russia later, suffered intense homesickness, so eventually returned but her whole family fell foul of the regime and she committed suicide.

Dilys Wood founded Second Light Network of Women Poets in 1994. Her collections are Women Come to a Death (Katabasis, 1997) and Antarctica (Greendale Press, 2008).Â  She has co-edited Second Lightâ€™s ARTEMISpoetry and the following anthologies of women’s poetry: Fanfare (2015), Her Wings of Glass (2014), Images of Women (Arrowhead Press, in association with Second Light, 2006), My Mother Threw Knives (Second Light Publications, 2006), Making Worlds (Headland with Second Light, 2003) and Parents (Enitharmon Press, 2000).Â  ARTEMISpoetry is a bi-annual poetry magazine in which all poetry, reviews and articles are by women solely concerned with women’s poetry.