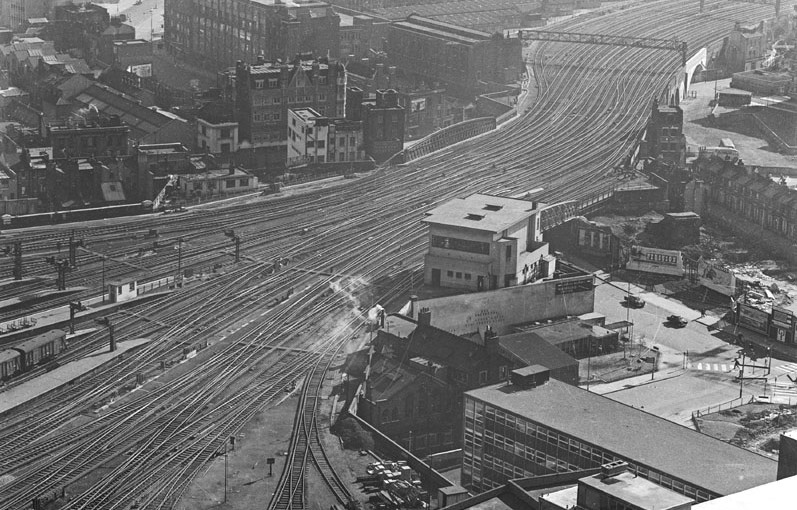 a squeeze of tracks tight between windows
thirty bottle panes across, a Pearce Duffâ€™s sign,

shadow lines of a custard tin. Here we are
cheek to cheek with chimneys, eyelevel

with feral pigeons arranged like heraldry
in their smoke-blackened niches. Crane lowerÂ â€“

under a mash of adverts left to peeling, through
iron bars set in yellow brick, liquid escapes

down grilled steps, sensing the river. This fine
bent gristle thing nudges us into the old stories.

Our wheels sharpen on a drawn-out mass
of points and then weâ€™re stationary, our heaving

carriage balanced over Union Street arches,
hearts beating up out of sleeping bags below

where once packers and platers lit their fags,
off to the Rose & Crown, after the factory closed.

Robin Houghton is published in many poetry magazines including Agenda, Bare Fiction, Envoi, Poetry News, Prole and The Rialto, and in numerous anthologies. She won the Poetry Society’s Hamish Canham Prize in 2013 and the 2014 Stanza competition, and was runner-up in the Plough Poetry Prize 2014. She has work forthcoming in The Best New British and Irish Poets 2017 (Eyewear Publishing). Her pamphlet The Great Vowel ShiftÂ  was published by Telltale Press in 2014. Robin has a background in commercial writing and online marketing and has written three commissioned books on blogging. Her own blog is at robinhoughtonpoetry.co.uk.