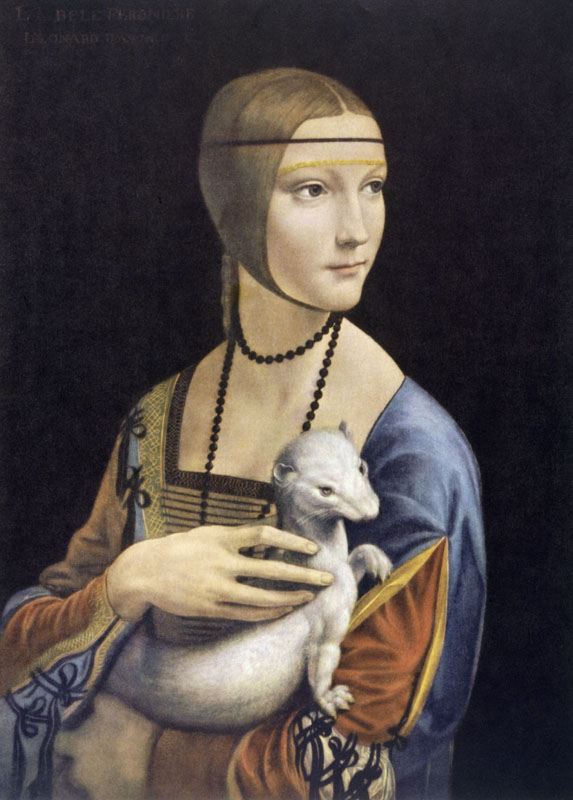 Lady with an Ermine

after Leonardo da Vinci’s portrait of Cecilia Gallerani, in the Czartoryski Museum in Krakow, Poland

Her eyes follow me around the room
with that secretive smile she shares
with her famous cousin.

Filled with the knowledge of what was, what will be
she slowly caresses the smooth warm ermine fur.

Leonardoâ€™s brush made a space for her to inhabit,
a grey-blue sky painted black much later â€“
she was pregnant, her son â€“ a Sforza bastard,
the white ermine – the emblem of her Duke.

Sheltered by Polish royalty, she revealed
her charms only to their closest confidantes.
In 1830, exiled in a precious wood box, to Paris,
In 1919, returned to taste the Polish freedom.

In 1939, hidden again, found by the Nazis
for Hitlerâ€™s last dream, the Linz FÃ¼hrermuseum,
Art among red flags and swastikas, flourishing
in the dark cavern of his mind. Never built.

Back home in Krakow, she is safe
in the recess of a museum wall. Under a muted spotlight,
Children play a game: walk briskly from right to left,
donâ€™t let your eyes leave her eyes, see how she is watching you.

Her eyes follow me around the room
Filled with the knowledge of what was, what will be
she slowly caresses the smooth warm ermine fur.
She knows that I know that she knows.

* Tesoro, amore mio, sii tranquillo, ti amo – fragment of a love letter in Italian, “Sweetheart, my love, be quiet, I love you”

Maja Trochimczyk, PhD,Â is a Polish American poet, music historian, photographer, and author of six books on music, most recentlyÂ FrÃ©dÃ©ric Chopin: A Research and Information GuideÂ (2015).Â Â Her seven poetry volumes include two anthologies, Chopin with CherriesÂ (2010) andÂ Meditations on Divine Names (2011), as well as Rose Always, Miriamâ€™s Iris, Into Light, and two prizewinning books based on Polish experiences of WW2: Slicing the Bread (2014) and The Rainy Bread (2016). A former Poet Laureate of Sunland-Tujunga, she is the founder of Moonrise Press and Board Secretary of the Polish American Historical Association.Â HundredsÂ of her poems, articles and book chapters have appeared in English, Polish, and other languages. She has read papers at over 80 international conferences and received many awards from Polish, Canadian and American institutions, for example the American Council of Learned Societies, the Polish Ministry of Culture, PAHA, McGill University, and the University of Southern California. Â trochimczyk.net