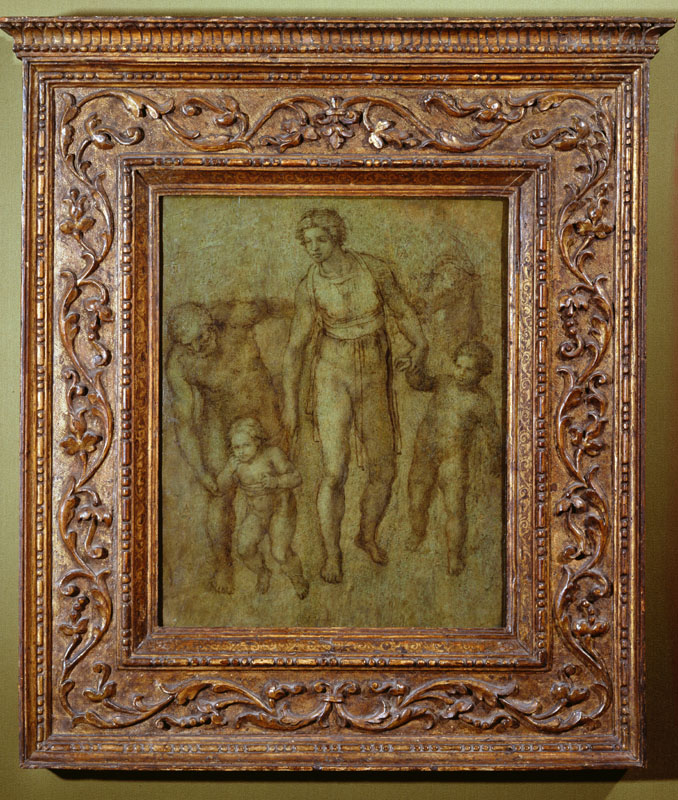 The family is coming through this green,

light from a copper moon, it bathes the woman,

who bends a little, watchful of the boy,

her face attentive, sensuous; she knows him

even by her, in earthy ways his maker.

This comes so beautifully from its maker

to me; I notice firstly all that green,

for which a poplar fell. Buonarroti held

a brush freighted with soot, to trace this woman

whose youth, intelligence, leap to us from him.

The man, much fainter, bends to restrain the boy.

But she has him, and John, the elder boy,

gripped by the wrist, watching the troublemaker,

He too, though, growing fast – not really green

in any sense – he shares with the young woman

What sense in this quick sketch is so well held?

Must we all surrender to this tiny boy?

I keep returning to the tall sweet woman

who holds it all, no everyday homemaker,

dressed as in smoke, in Venus’s colour, green  –

she is the key, through her people pour to him.

Is that what the painter meant, that we reach him

through looking at these marks, an illusion held?

Was there a reason why you selected green,

whose energy promised a new kind of maker?

Yet whose earth pattern came straight from a woman?

I look at her and love her, sexy woman

and serious, funny too, firm holding him.

He must have known her well, this picture’s maker,

to make her so radically, dearly held

as human, powerful, strong enough for this boy,

painted with woodsmoke on poplar wood, all green.

The family group in green, around this woman

follows the straining boy, all focused on him,

because he held the world, really its maker.

Louise Larchbourne graduated from Birmingham University with a degree in English, then became an actor and ‘local poet’, performing regularly in Birmingham. Some of her poems appeared in a Birmingham Arts Lab collection of four women poets in 1972. She wrote less while bringing up a son as a single parent. She is a member of Oxford Backroom Poets and Stanza 2. She is interested in performance art, which she sees potentially as 3D kinetic poetry. She also does freelance publishing work. She has given readings of her own and others’ poetry in residential homes. She organizes Ekphrasis Poetry, with regular sessions at the Ashmolean Museum in Oxford, with poets invited to write on a theme and a museum exhibit. Among her favourite poets are John Donne, Kayo Chingonyi and Wallace Stevens. She is edging towards a collection.