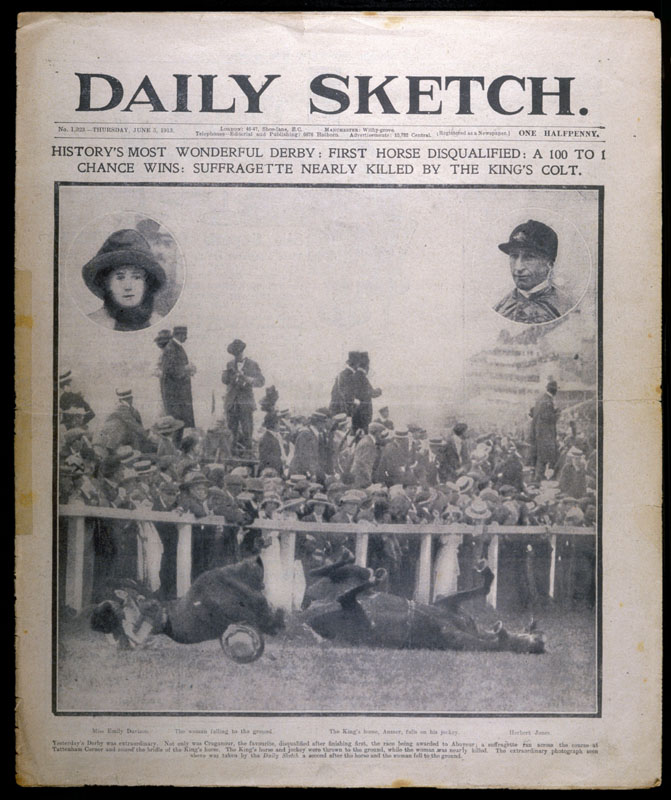 The reason for your being here

your Causeâ€™s colours sewn inside

The camera sees the moment

you began to die:

the jockey, trim in silks, is doll-like

on the grass and seems asleep;

his mount is spraddled on its back;

its useless hooves flail at the sky.

your hairâ€™s still not come down;

youâ€™re frozen, inches from the ground;

your boots are neatly buttoned,

Youâ€™re stopped in time. No sound,

no texture, no sour odour

of bruised grass and earth. Just

silence and the alchemy of light.

How did you comprehend

in that white moment

when the dark came down?

itâ€™s business neither truth nor lies.

It shows a fallen horse. A woman falling. A crowd

in hats and blazers staring down a long perspective;

the field intent upon the distant fairy icing

Until the image blurs, dissolves in silver flowers,

itâ€™s there on celluloid in shades of grey;

the camera only says that in that instant

you are dying, and everyone has looked away.

John Foggin lives in Ossett, West Yorkshire. His work has appeared in The North, The New Writer, Prole, and The Interpreter’s House, among others, and in anthologies including The Forward Book of Poetry (2015, 2018). He publishes a poetry blog, The Great Fogginzoâ€™s Cobweb. His poems have won first prizes in The Plough Poetry (2013, 2014), the Camden/Lumen (2014) and McLellan (2015) competitions respectively. In 2016 he was a winner of the Poetry Business International Pamphlet competition judged by Billy Collins. He has authored four pamphlets/chapbooks: Running out of Space and Backtracks (2014), Larach (Ward Wood Publications, 2014) and Outlaws and fallen angels (Calder Valley Poetry, 2016), and two collections, Much Possessed (smith|doorstop, 2016) and Gap Year, co-authored with Andy Blackford (SMP Publications, 2017). His latest pamphlet, Advice to a Traveller, was published by Indigo Dreams (2018).