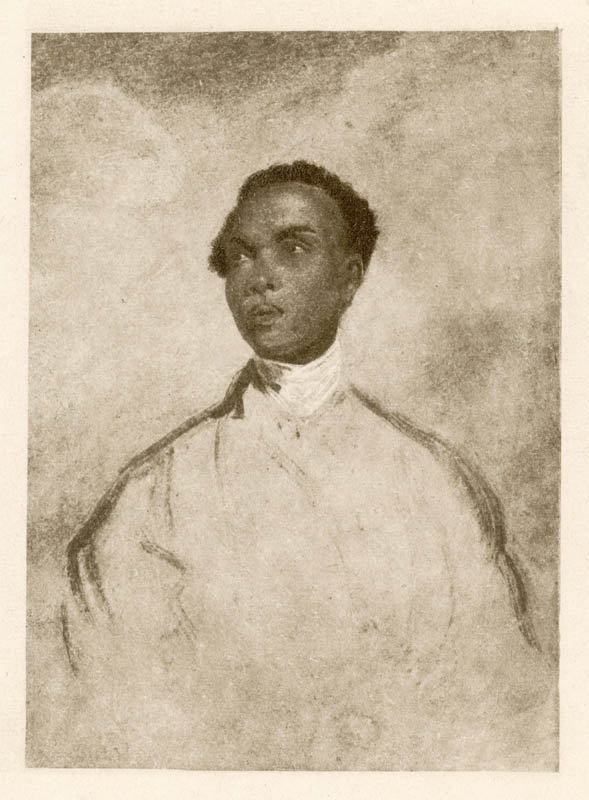 Francis Barber was treated â€˜with great tendernessâ€™ by the recently widowed and childless Dr Johnson, who educated him and made him his residuary heir, calling him his â€˜boyâ€™.

for I walk with measured gait, attending

learned gentlemen who are listening

to my masterâ€™s wisdom â€“

a black figure in the background.

I am Francis, Francis Barber,

though you will call me Frank.

for Quashey was my childhood name

I was brought here, a boy of ten, and learned

to change, which I have done, to serve the learned Doctor

so he could breakfast in some splendour,

later to dine with learned friends.

since the Colonel gave me my freedom

in his will, along with twelve whole pounds.

I served in an apothecaryâ€™s, and then the Navy

but came home to serve my dear old master,

with my wife and children.Â  When he dies

Iâ€™ll be there at his bedside.

my son is named Samuel, my daughter Betsy â€“

his favourite. I am his heir and when I am old

Iâ€™ll spend my time in reading and fishing

and planting potatoes, for I am changed â€“

I am no longer a slave in Jamaica

but the boy of a Doctor, my most learned master.

Richard Westcott (once upon a time a doctor) has had poems pop up in all sorts of places, won a prize here and there, and been listed, commended and highly commended in various competitions (including the Hippocrates, York Mix, Camden Lumen, Plough, and Poetry on the Lake).Â  He won the Poetry Societyâ€™s annual Stanza Competition in 2018, judged by Penelope Shuttle, with his poem â€˜A Traditional Cureâ€™.Â  A pamphlet, There they live much longer, was published by Indigo Dreams in March 2018, and his blog is at www.richardwestcottspoetry.com